History of the Agility Dog Club of South Australia

Gwenda was so impressed with the way club functioned, and with the equipment they had assembled, she concluded that South Australia's Agility community also needed a specialist Agility Dog Club.

Returning to S.A., Gwenda approached the President of the SA Canine Association, at that stage Mr Bob Lott, with her idea for an Agility Club at SACA Park to encourage a sport which would amalgamate all disciplines of the dog performance world. It was met with some enthusiasm by Mr Lott, and he agreed to support the proposal at Council level, and to provide financial support if needed.

So, on June 10th 1992, a meeting was called and presided over by Gwenda, with eight other Agility people attending. From this group, a working party was formed to master-mind the establishment of an Agility Club, to be affiliated with S.A.C.A., the formation of an Advisory Committee, the training of Judges and Stewards, and the necessary funding required.

A meeting was scheduled for July 16th at SACA Park, and flyers were sent out to all clubs advising them of these developments, and inviting interest from the wider dog training community.

That meeting was attended by forty-five interested people, and a list of nineteen points of concern were raised and dealt with. It was, for instance, clarified that it was not the intention of the new club to 'poach' its members from other clubs, but to form a specialist Agility Club, not involved in training for other disciplines.

This sub-committee next met on August 5th, when it was decided to officially launch a specialist Agility training club at SACA Park at a general meeting to be held on October 29th. In the interim the club would be referred to as 'The Agility Club'.

Twenty-six people attended that October meeting, sixteen of whom became the club's founding financial members by paying a $10.00 joining fee, and from this group came the first Committee made up of:

Adrian Ahrens proposed the name "AGILITY DOG CLUB OF SA", which was seconded by Don Adams, and the motion was carried.

At the first official meeting of the AGILITY DOG CLUB OF SA on November 12th, our club logo was adopted, and the club colours decided as Blue, Red & Yellow. Membership fees were introduced as: JOINING FEE-$5.00; MEMBERSHIP FEE - $10.00.

It was proposed by Adrian Ahrens, and seconded by Sandy Steele, that Gwenda Baker become the first Head Instructor of the Agility Dog Club of SA. That motion being carried, Gwenda automatically became the seventh member of the committee.

This meeting was also attended by the SACA President Mr Bob Lott, who went on to tell the committee that SACA supported the club 'one-hundred percent', and would help out financially with a loan and a donation.

Training commenced on April 1st 1993, with borrowed equipment, most coming from Don Adams.

We used this collection until later that same year, when Neville Cox finished making our original set, which was donated by BHT Industries.

The acquisition, adaptation, maintenance, and improvement of the club's equipment has continued to occupy a considerable slice of Neville's time, and club resources, ever since.

Club-members at an equipment working bee in July 2001 at S.A.C.A. Park, Neville Cox & Steve Reynolds on the right.

At the AGM on 27th October 1994, the impetus and contribution that Gwenda Baker had given to the club was recognised by bestowing upon her the honor of CLUB PATRON. Nominated by Elaine Hersbach (now Cox) and seconded by Fairlie Sampson, Gwenda has fulfilled this office until her death in January 2014.

The club became an incorporated body in March 1994 and affiliated with the South Australian Canine Association in 1995. The first Agility trial was held on 7th July 1996, with 62 entries in AD, 22 being club members, and 13 entries in the Veteran class, 4 being club members. The first Agility Masters Class held in S.A. was at our club in May 1997, Judged by Mr David Rumble, There were 17 entries, no one Qualified.

At the club's Annual General Meeting at the end of 2001, members voted overwhelmingly to accept the terms of an offer and invitation to move headquarters and training grounds from the S.A. Canine Association to Pedigree Park at West Beach (the grounds of the German Shepherd Dog Club of S.A.).

This move took effect from the beginning of 2002, with equipment stored temporarily for several months on trailers until storage was purpose-built to accommodate it, and a close working relationship between the two clubs has been established to mutual advantage.

Our founder and longtime Patron, Gwenda Baker died on 29th January 2014, after a long battle with cancer. Gwenda was one of South Australia most successful competitors and is sadly missed by our club. 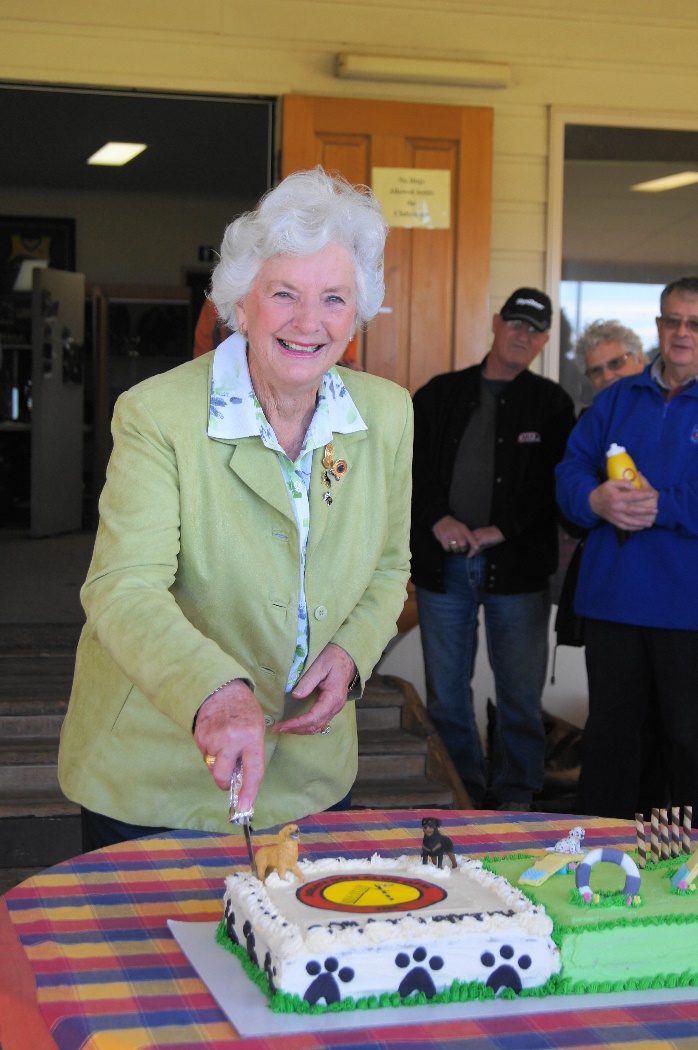 ADCSA provides training, development and competition opportunities for people of all ages to participate in active recreation with their dogs in the sport of dog agility.